Homily for the 150th Anniversary Mass 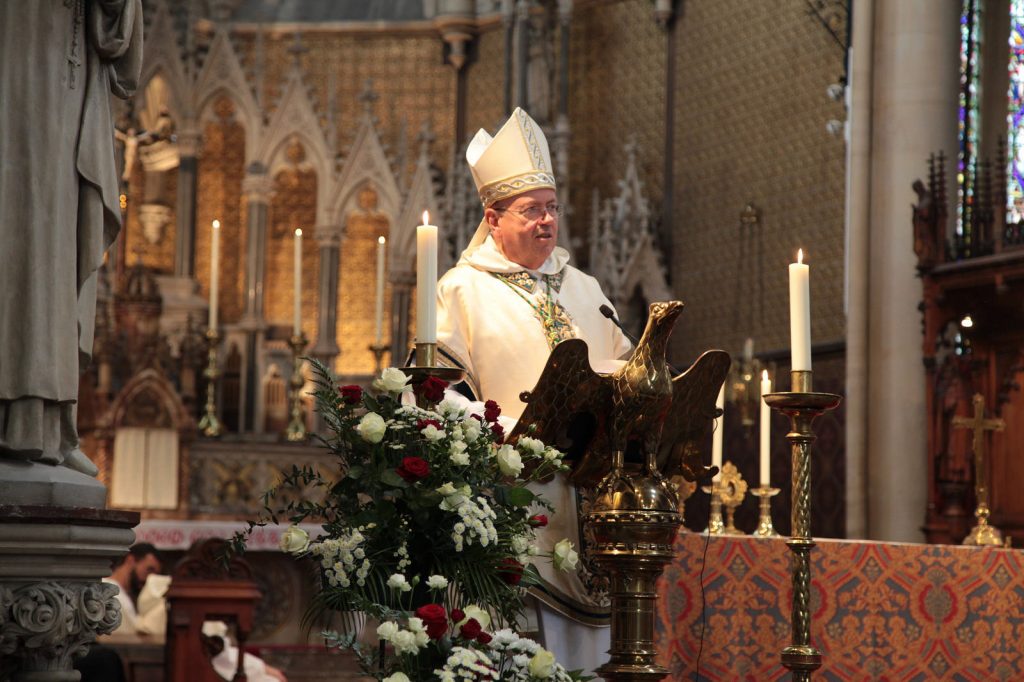 Archbishop Malcolm McMahon OP has kindly given us the text of his Homily preached at our 150th Anniversary Mass on 7 October 2017, which we are pleased to reproduce below:

50 years’ ago I remember receiving a copy of the Priory Post celebrating the centenary of St Dominic’s Parish community.  At the time I had just moved to Manchester to start university, and a lady who I used to help sell newspapers in the repository on Sundays sent it on to me.  Where does time go? Of course the parish that many of you and I grew up in has long gone, and there is a new type of community worshipping here at St Dominic’s.  The stories that I was brought up on – like Fr Bertrand Pike and Antoninus Maguire (Cliff and Jim) visiting Litcham Street (now Athlone street) together because even the police worked in pairs in that part of the parish are long forgotten.  Fr Vincent McNabb who died in 1943 was still in the minds and prayers of many people for his preaching and his holiness, and others like Brother Joseph Gillespie, sacristan for many years between the wars, were often talked about.  Fr Austin Rooke, the first parish priest–and after working elsewhere returned as parish priest until his death–was thought highly of by fellow priests and bishops. I think it was Cardinal Manning who described him as his best parish priest, but he probably said that to them all. Fr Dominic Aylward who worked in the mission at Kentish Town, a musician and hymn writer and moved from there to Haverstock Hill to be among the first of the Dominican community here.  These men and many in between like Fr Bede Jarrett, who was more known for founding the 3rd Hampstead Scout troop and Cub pack than being the great writer, preacher, and provincial that others know him for, laid a foundation that has lasted a century and a half.  The people were proud of their priests, and they loved them very much.

It is said that Cardinal Wiseman, the first archbishop of Westminster, had a plan to put the religious orders on the hills around north London, to make foundations with large churches that would become cathedrals when the people of London returned to the Catholic Faith.  Well, it didn’t happen quite like that as we know, but if it wasn’t for that foresight, we would not have this beautiful church dedicated to our Lady of the Rosary.

The feast we celebrate today is depicted in the some of the windows  in the Lady Chapel which show the Dominican pope Pius V paying the Rosary to ask our Lady’s intercession to resist the invasion from the Turks.  They were beaten at the battle of Lepanto, and the great sea battle is to be seen in the stained glass, with the processions of the people in thanksgiving. Our Lady, our mother, to whom this great church is dedicated continues to care for her children.

The priory mission was opened in Kentish Town in 1861, just ten years or so after a handful of Dominicans met at Hinckley to plan for the closure of the province.  Within that short timespan the province had grown with foundations in Woodchester, and Newcastle on Tyne, as well as the old ones in Hinckley and Leicester as well as London. With help from France, Ireland and other provinces as well as a great influx of vocations there was tremendous growth and there must have been a buzz about the province, so Wiseman’s vision was not so outrageous or unreasonable.

The first church open for worship was the upstairs floor of what is now the Blackfriars Hall wing of the Priory.  The building of the church we are in today faltered due to lack of cash, and although it was started in stone, Fr Antoninus Williams finished it in brick.  He had come down from Newcastle where he had built the new St Dominic’s Priory in that great industrial city. Helen Tasker, a great benefactor of the diocese and the religious orders, gave most of the money needed to complete the task.

The Rosary is an inspired dedication for the church because it brings its worshippers right into the heart of the mystery of our salvation. It engages the senses in prayer, and this church with its many chapels does just that.  Words live in stone.  Just look at the third glorious mystery: the descent of the Holy Spirit.  In the top section is Christ adorned in glory sending forth his Spirit depicted in the reredos, and under the altar there are the disciples with Mary receiving that gift.  It is Jesus who makes us a family in this way, so that the Rosary is not just a prayer of or for the family but by entering into the mysteries we become family with Jesus our brother leading us to his Father under the inspiration of the Holy Spirit.

The wide side aisles in this priory church give room for the people of the parish to process, led by the cross to symbolise the unity of the God’s people on their pilgrimage through life. And that is why we are here today to celebrate 150 years of walking together as God’s family, his people.

Throughout hardship and times of plenty the Dominican fathers and brothers walked with their people.  Fr Simon Blake a great peace activist and educationalist walked in the first Aldermaston marches calling for the ban on nuclear weapons.  Fr Columba Ryan walked from this church with Simon and many laymen to Vezelay in France as an act of reconciliation after World War II.

Walking to Hyde Park on Sunday Afternoon to preach at Speakers Corner near Marble Arch was begun by Fr Vincent McNabb and continued by Donald Proudman, and Fr Alan Cheales (more likely on a bicycle).  Symbolically and actually the Dominicans walked with the people who worshipped here in families from generation to generation.  Some families, even in these days of declining congregations, have connections over five or even six generations.  The people came from all over the world; from Italy and Ireland as well locally, and then from the Caribbean, and still they come from the great continents of the world.  The mix of peoples at St Dominic’s has always been its best feature – I remember the joy expressed by all the parish when a terrific new statue of Blessed Martin by the Dominican Sculptor Fr Thomas McGlynn was installed – the play City of Kings on the life of St Martin was put on in the old Blackfriars Hall to packed houses by the Priory Players.  In fact it was revived later on when Blessed Martin was canonised.  Having a mixed race patron and brother is a great symbol of unity for St Dominic’s which has made this parish a place of welcome for everyone.

Geographically the parish is much smaller than when it was first founded.  The ‘carriage end’ toward Swiss Cottage and Fitzjohn’s avenue was lost when Swiss Cottage was founded and Camden Town took two more slices at different times, but there is still a lot left – two primary schools, a teaching hospital and the many, many people who are part of the parish family.  May God continue to bless us as we look forward in the certain hope that God will walk with us.  May our Holy Father St Dominic pray for us!

Homily for the 150th Anniversary Mass